For many years the procedure for ordering customised wristbands was cumbersome. It started by sending graphics and other relevant information about the wristbands to the producer via mail. The producer would send back a graphic proof file for approval and correspondence would go back and forth until the person ordering the wristbands was satisfied with the graphic result. This procedure was consuming time and involved manual work of skilled graphic designers. Ordering via eMail is till used today but a smart alternative was developed.

As computer programming options became more accessible and affordable JMband decided to develop a system that eliminates eMail correspondence and allows our customers to design the wristbands they want on their computer screen.

We were among the first to pioneer commercial Online Designing and in 2007 introduced our first Designing tool.

It was written in ASP.NET, was limited in functionality, was working only for paper wristbands but it was a breakthrough at the time and our customers loved it. When our first order via our newly developed designer came in, we were exuberant.  Orders started streaming in and it took us time to adjust and cater the accelerated demand. 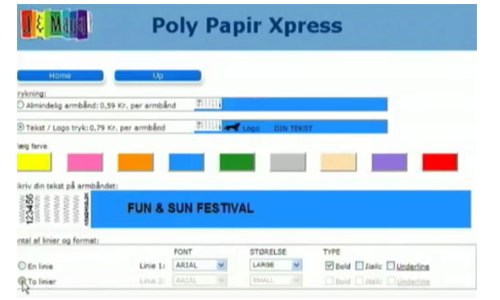 Our first online designer for paper wristband written in ASP.NET

In order to get more functionality and flexibility in designing in 2011 we have moved to an Adobe Flash based designer. More customisation options were offered such as the option for uploading quadratic logos, finer positioning options, final product image sent to customer and added on the invoice itself and other functions. Besides that, the designing options we extended from paper wristbands to other products such as Plastic and Textile wristbands, Tickets, Lanyards, Race numbers and other products. 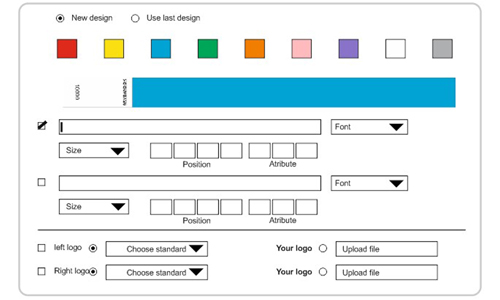 The disadvantage of moving to Adobe flash was that the response-time was reduced compared to our old ASP.NET designer which meant slow loading of the images to the screen. Besides that, Adobe Flash technology was rejected by software giants such as Apple Computers because of internet security reasons. These companies blocked flash installation on their devises, which lead to loss of popularity and eventually to the “death” of Adobe Flash technology. We needed to follow the trend and move onwards.

It took HTML5 technology long time to mature and it took us some time to translate the features we needed from flash to HTML5 finally in 2016 we have introduced our latest designer using HTML5 technology. Fast response time and no more blocking problems. We have introduced new features such as “show printing area”, “Make it simple”, drag and drop positioning, allowing our customers to have even more control on how the final products will look, while designing was made easier and clearer. 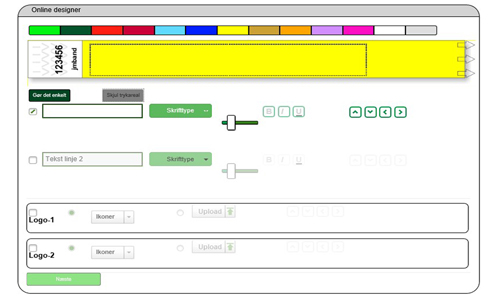 Our third-generation online designer for paper wristband written in HTML5

We are constantly working on fine-tuning and adding more functionality to our Online designers. Sometimes added features are not really visible to the customer on the Designer itself but they are revolutionary for us. For example, a feature that was added in 2018 to our HTML5 designer is generation of vector-based images for production. In the past we used bitmap images for production that had limited scaling options. The new feature allows us now to scale the image before printing (if needed), so that printing comes out sharp and clear.

The future of online designing

Technology goes forward and it is hard to stop it. So far, our designers were two-dimensional (2D) which means that a flat image of the products was presented to the person using the designer. The future is no doubt in developing a three-dimensional (3D) designer. It will allow the person designing to get a better idea of how the final product will look like and the image representing the product will allow looking at the image of the product from Different angles.
Initial investigation and other preparations are going on for our next generation, 3D online designer.

We got in the past and are still getting now, many compliments from satisfied customers that take advantage of this practical tool that we have developed. We are very proud of this achievement at JMband.